I hope that you are all continuing to enjoy your holiday festivities. Our days have been quiet and peaceful, just the way I like them. After a whirlwind visit from Grandma L. we have been settling in to a calm, relaxing routine this holiday break: sleeping in, quiet play and lots of movies & knitting time. The only personal drama being a bit of a Poor Rudolph Hat withdrawal which resulted in the creation of these mini ornaments. And look! I finally figured out how to use my Clover pom pom maker. Such a clever device, although I have a tendency to overly fuss and trim the resulting pom poms too much. 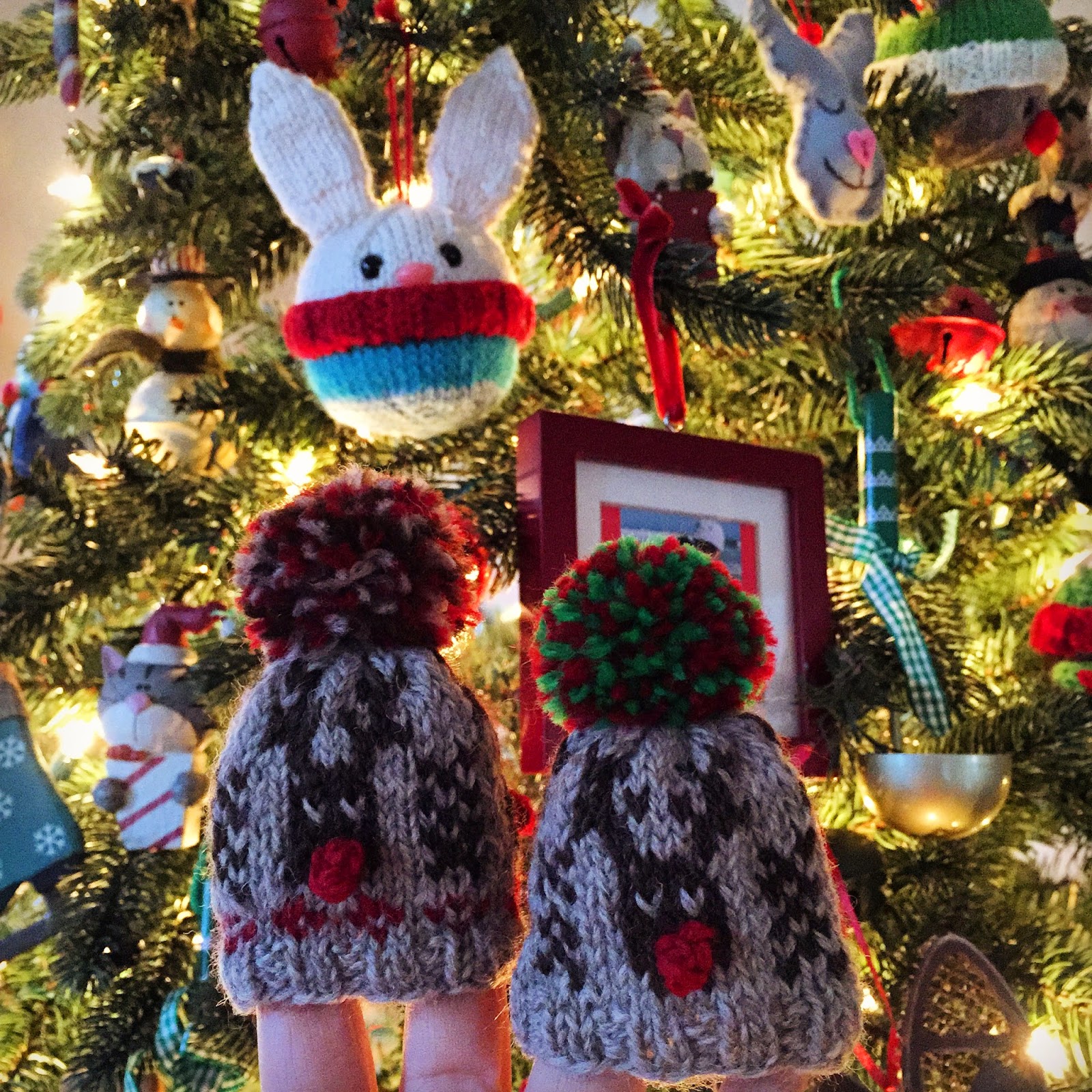 I also finished a pair of mittens for my niece just in the nick of time (they were literally cast off on Christmas morning). She had sweetly requested a pair of blue mittens but I over thought the project and could not decide which shade of blue to use. So I decided to raid the stash and came up with three shades with a pleasing gradient effect. The mittens were a mash up of two patterns: the Cozy Purl Ridge Mittens with its afterthought thumb construction and the beautifully simple colourwork from the Hiro Mittens design. They were a big hit with the niece and I might knit up a pair for myself in the same colors in order to use up more of the stash. 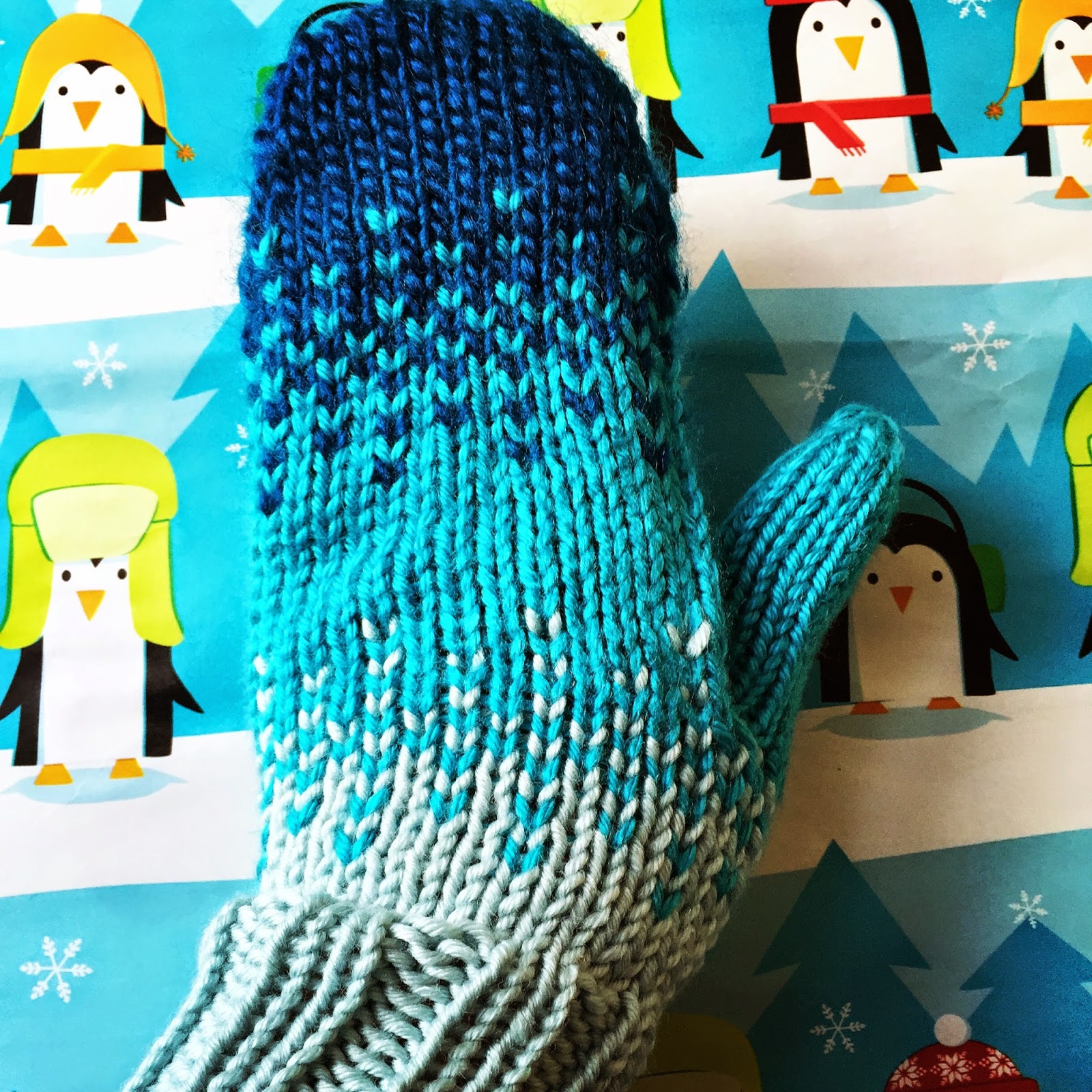 In fact, looking back on the projects from this past year, knitting from the stash was a common theme. Giving myself a pat on the back for this, although at the same time, I am not so proud of the basketful of WIP's and UFO's carrying over into the New Year. I think that my low FO count this year is mainly due to having too many projects going on at once. At one point there were four or five sweaters simultaneously on the needles even. So the main goal for January and February is to come to terms with my impulsivity and to deal with these on-going projects one way or another. Either finishing them or ruthlessly frogging them, because they are putting a damper on my knitting mojo right now. So the big lesson learned in 2014 and the goal set forth for 2015? Be more mindful of what gets put on the needles!

What kinds of creative goals are in the works for you in the new year? Any lessons learned from this past year? Here's to a brilliantly fun 2015 and thank you for continuing to share in this creative journey. You are all a constant inspiration to me!

Labels: Holiday, Looking Ahead, Looking Back

Have you been following along with the Yarn Harlot's holiday posts this season? I read with interest how she organized all of her holiday gifting, making, decorating, etc. on a color-coded spreadsheet. How awesome is that? So unlike my wacky method, which is to procrastinate until one week before the big day and then cram all of my shopping and gift wrapping into a couple of days. Although the one advantage to my method is that after those few {intense, stressful, hectic} days are over, I get to relax and savor the fun holiday stuff like baking, decorating, holiday movie watching and of course, knitting. I kept the gift knitting list short and sweet this year, with an emphasis on using yarn from the stash.

❄ A couple of cowls: 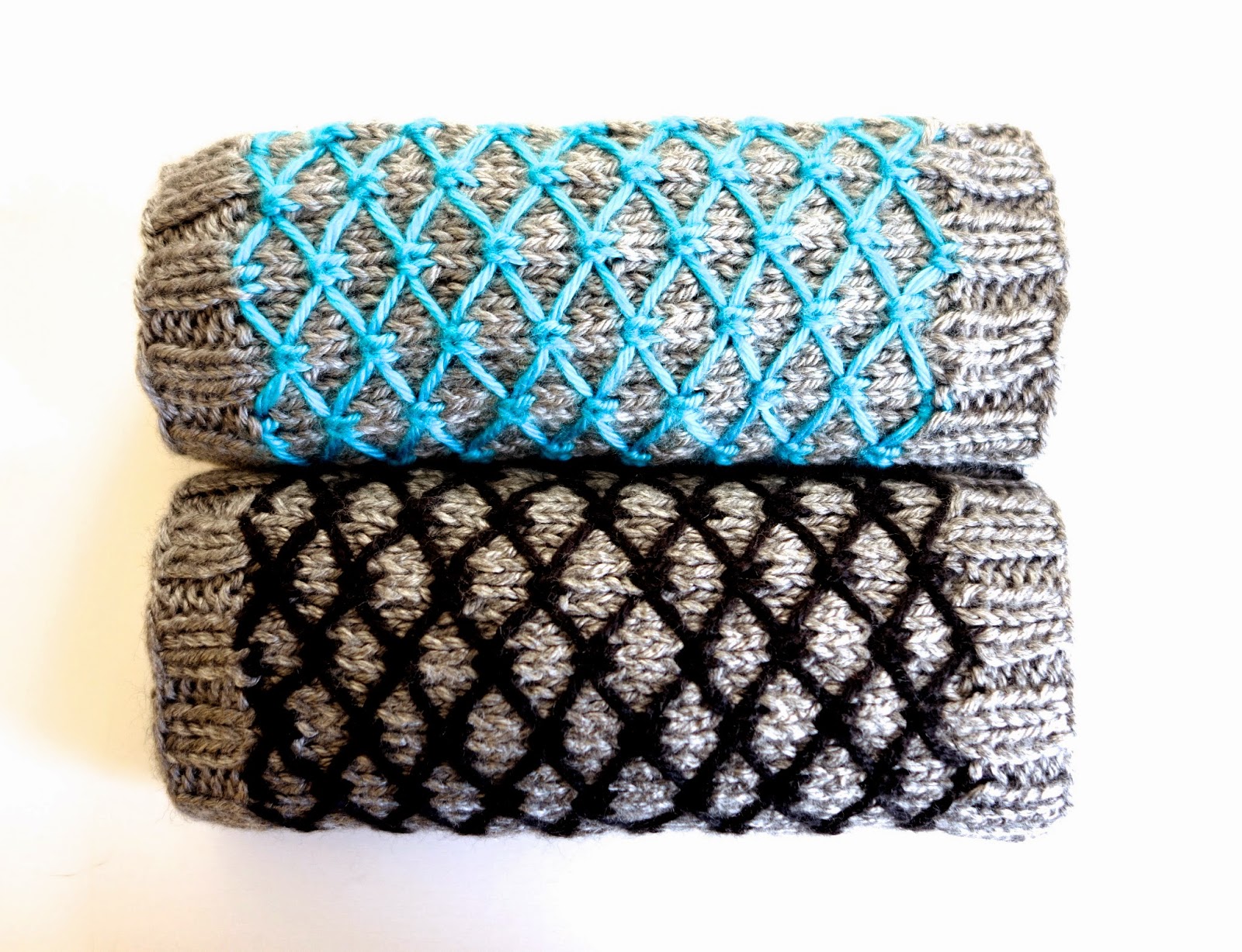 For these cowls, I decided to shorten my Candy Ribbon design. These were much quicker to knit than the original longer version.

❄ A trio of Rudolph Hats, two of which you've already seen. I saved my most favorite version for last: 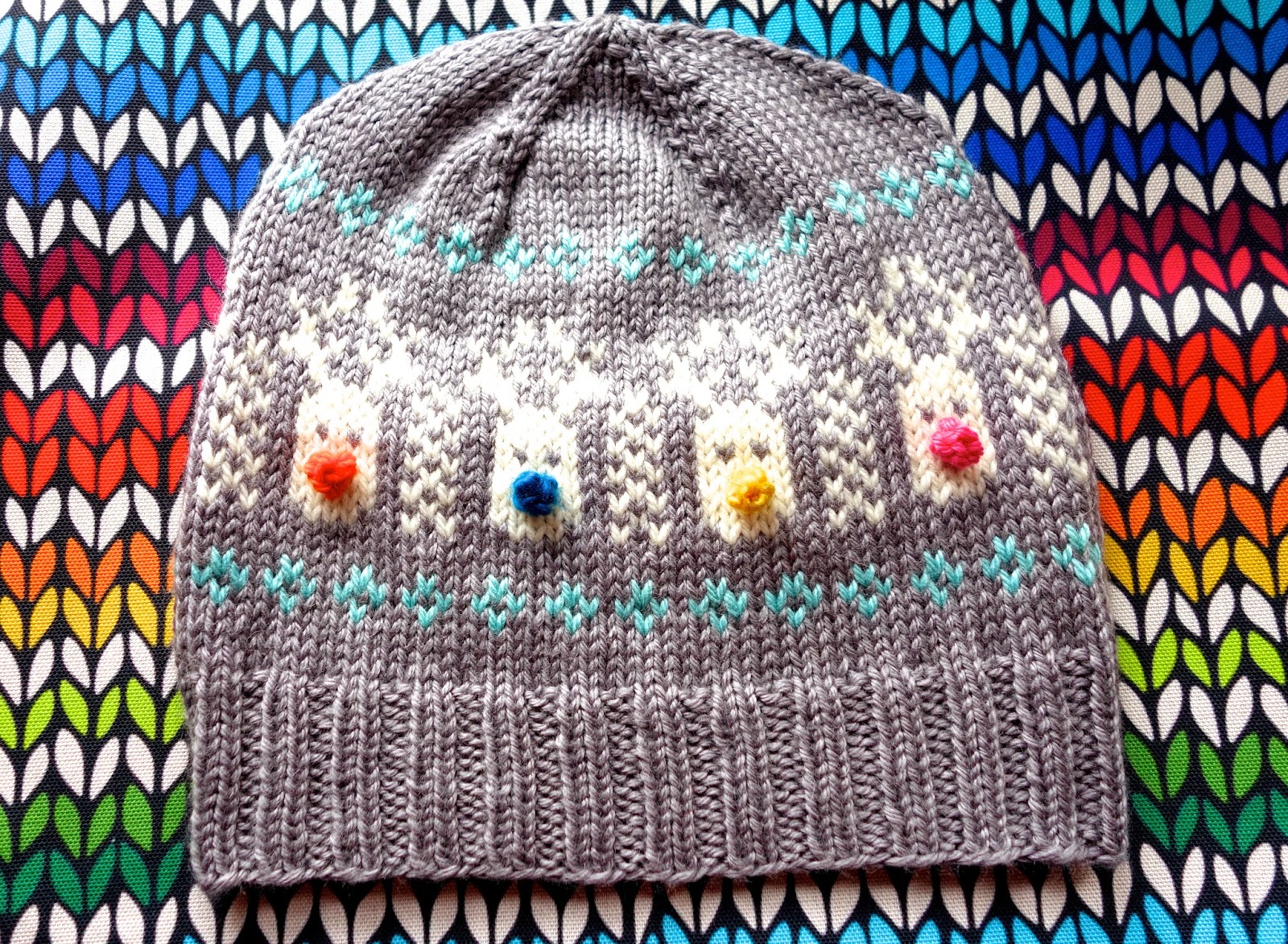 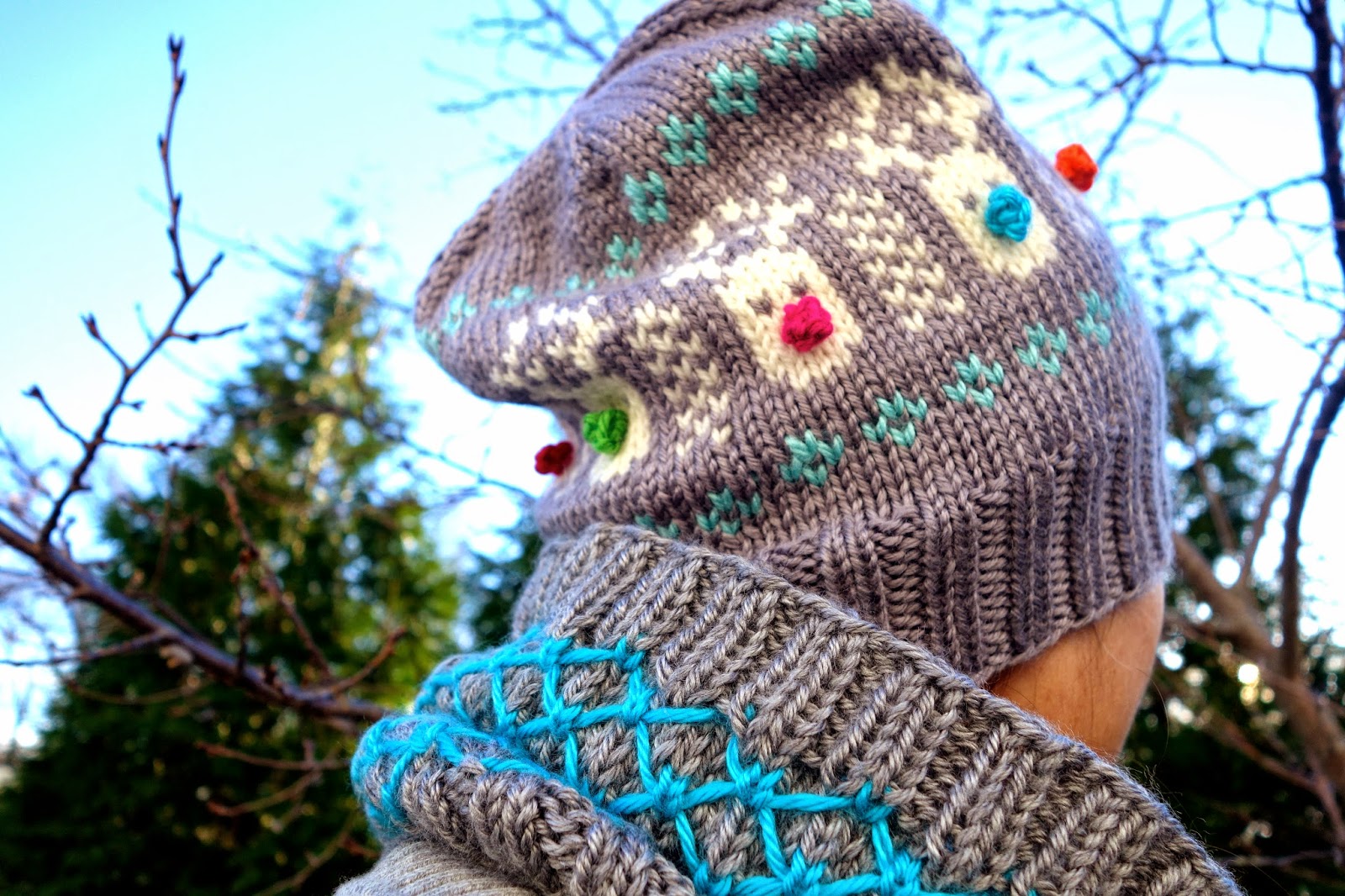 Now all that's left is a pair of mittens and maybe a few fun ornaments if there's time. But first, some hot cocoa and tree gazing is in order. Look closely and you'll see the sweet surprise that arrived in the post. Thanks Steph! Little Mousie has already made himself quite at home! 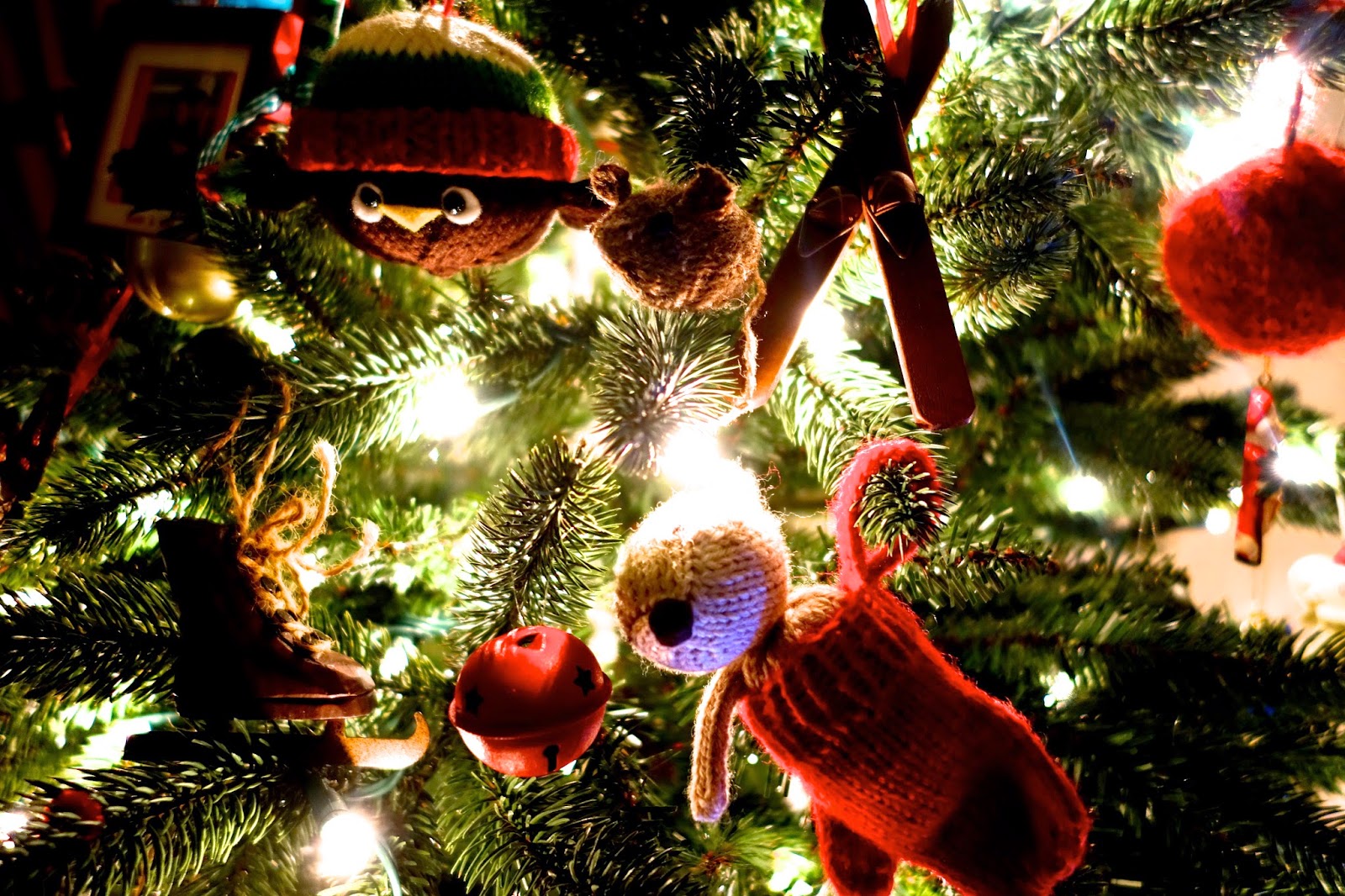 We are taking things slow and easy this holiday season. No point in rushing through the days to get everything checked off the list. It will all get done eventually. Right now, I am enjoying the little things that make this time of year so special.

Decking the halls with some festive ornaments and greenery: 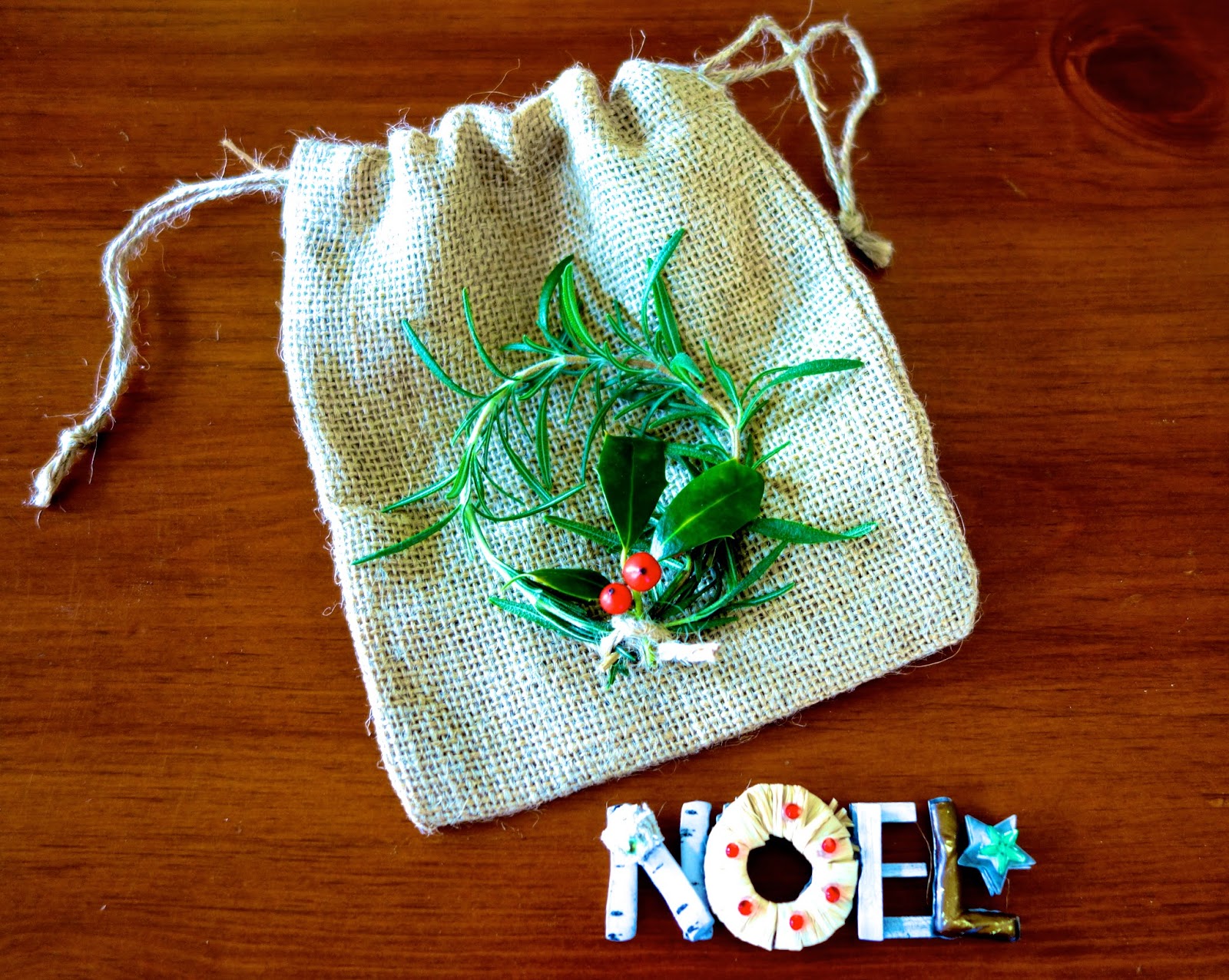 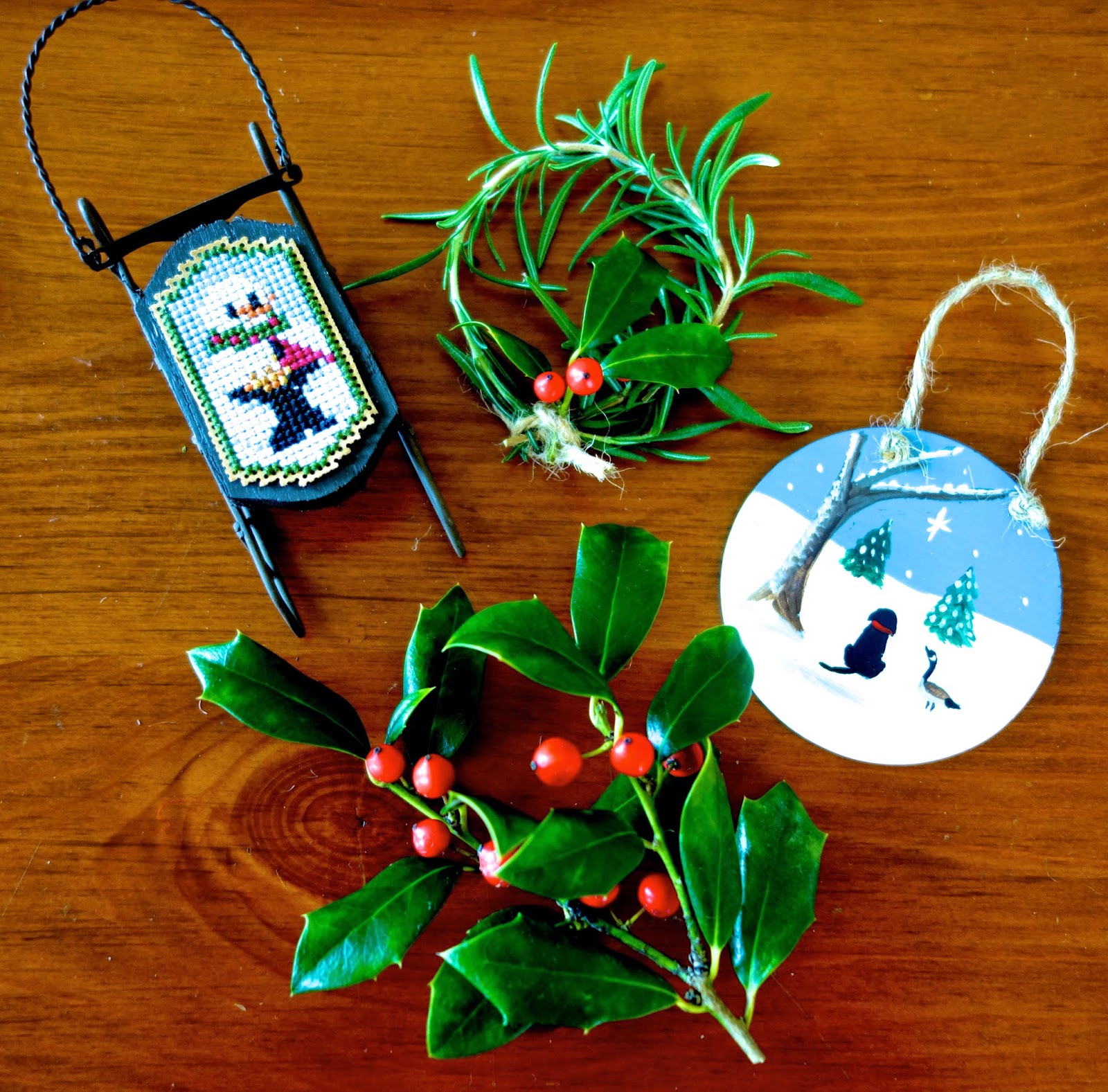 Knitting away on a few more gifts while taking frequent breaks to plan next year's projects. So many gorgeous knitting books and magazines have been arriving at my doorstep recently (not pictured is Yokes by Kate Davies which I am so crushing on at the moment): 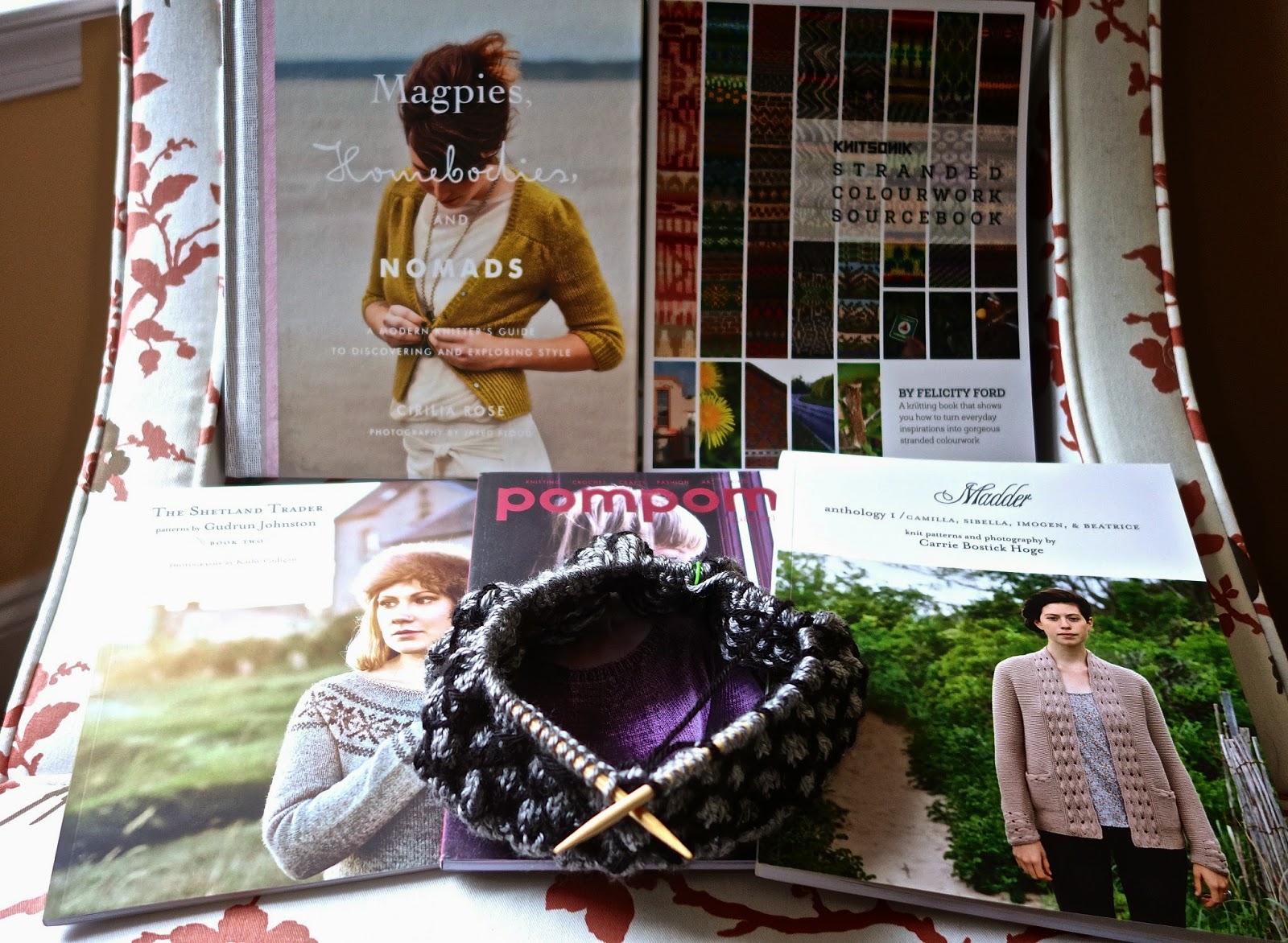 Wrapping up some handmade presents. This is the hubby's Rudolph Hat in classic outdoorsy colors: 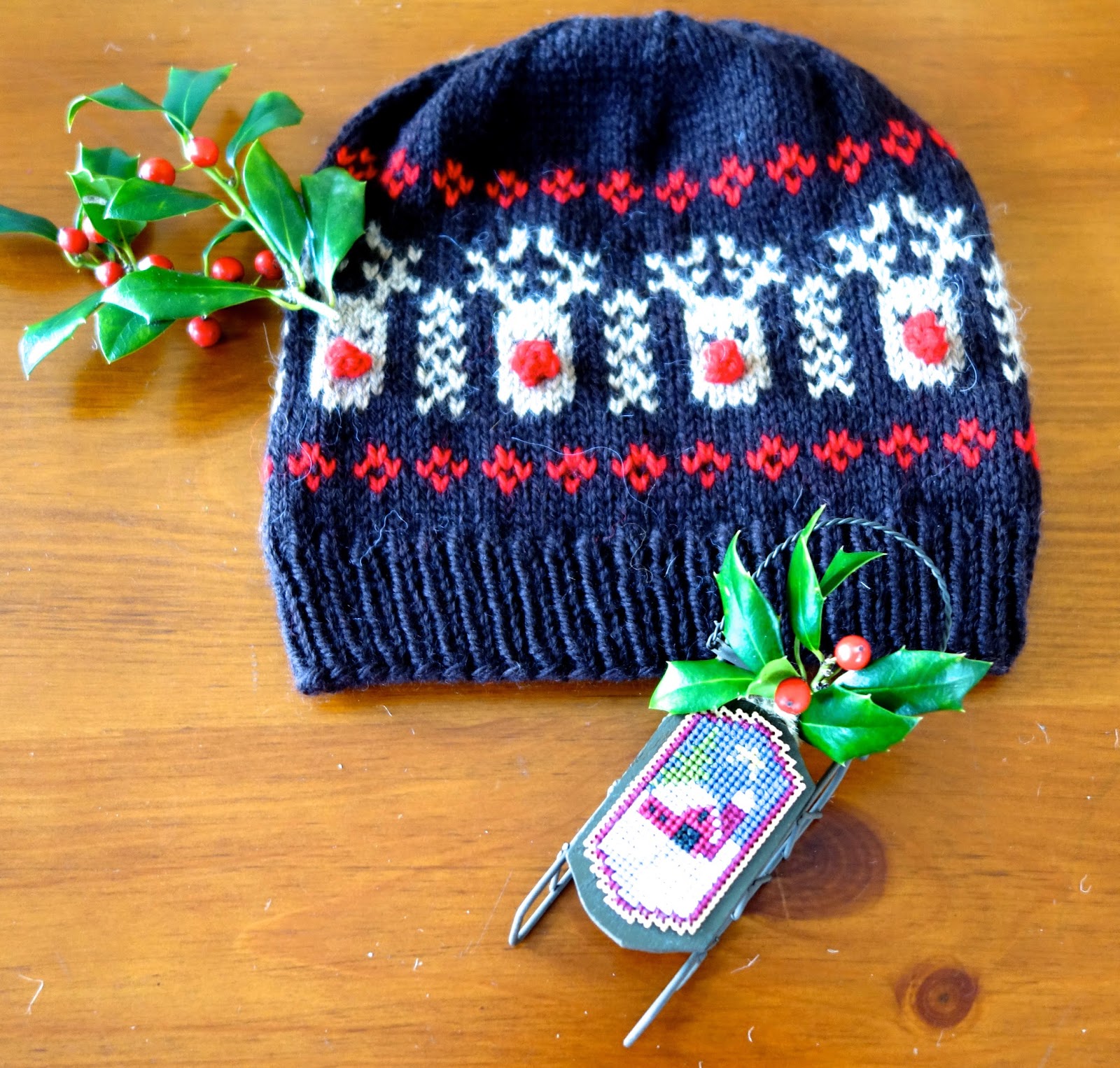 I also finished mine, but will wait until the next post to show you. There's still time after all.
7 comments: