Participating in blog week has been such a blast! A huge thank you to eskimimi for her hard work in organizing this event. Also, hugs to all of you for your creativity, inspiring words and kindness. You make me want to push my crafting and blogging further. In fact, it was mainly because of all the cool crochet projects that I have encountered on so many of your blogs (in particular here, here and here) that made me want to get serious about learning how to crochet. And boy, has it been a fun journey!


Now the biggest challenge is to find a good balance between my ever growing knitting projects and my new crochet love. The current strategy is to have one crochet project always on the hook so that my skills do not get rusty. So far this has worked out well since the crochet projects that I am drawn to right now are very simple, spontaneously colorful ones.

I would say that these make perfect counterpoints to my more involved knitting projects. Although I am finding it harder and harder to resist starting more crochet projects. A larger WIP basket might be necessary soon!
8 comments:

Today's topic ties in with one of my New Year's crafting resolutions which is to challenge myself to learn "something new". So far this year, I have intentionally picked projects that allowed me to challenge myself a little bit more. The following is a short list of some techniques that I would like to improve upon or learn this year. 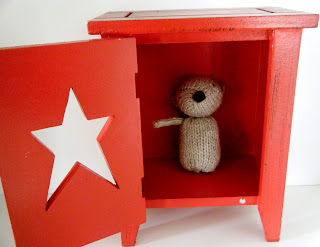 Have you ever wondered what our abandoned projects think about while they wait for us to notice them again?

A Knitter for All Seasons - 3KCBWDAY4

Today's topic was an interesting one because it made me reflect on how very much the seasons influence my creativity. The types of fiber, colors and patterns that I use are all clearly linked to the calender, as shown by the following examples:


Winter knits consist mainly of cozy items like cowls, mittens and sweaters. My fibers of choice for winter are wool, wool blends and alpaca. Cool colors like grays and blues can be found on the needles.


For me, Springtime is a pause between Winter and Summer. So for this transitional period, warm accessories with a hint of green are a good choice, as well as lighter weight sweaters.


Summer is one of my favorite times to knit. I love to experiment with different fibers like hemp, bamboo, linen, corn and cotton. This is also the season when I have the most fun with colors. Projects range from small accessories to shawls and sweaters.


Autumn is my absolute favorite time of the year. Colors that reflect the beauty of the season, like red, orange, brown and gold are my obvious choices for shawls and sweaters. And black for Halloween!


Now I have a confession. At this point, you might be saying to yourself, "Wow, this girl is so organized!" Umm, not quite. While most of these knits were started in the "right" season, many of them were buried unfinished in the knitting basket when the next season came along. So my summer knits often were not finished until the depths of winter. It totally does not make any rational sense, but that's how I roll.
15 comments:

Classic yet Modern. Flattering. Comfortable. Versatile. I came up with this list of criteria for sweaters after knitting one too many disappointments. My knitting self-esteem was at an all time low and I despaired of ever making a sweater that did not scream "potato sack"! Then one day I discovered the fabulously wearable designs of Heidi Kirrmaier. Three and a half sweaters later, I am still amazed by her talent. Not only are Heidi's patterns fun and interesting to knit, they are also clearly written and easy to follow. Her designs are not flashy or trendy, but quiet and filled with simple, lovely details. Wearing one of her sweaters makes me feel like a million dollars. What more can a knitting gal ask for?

A Basket of Flowers - 3KCBWDAY2

Meet blue. She is a gift from my sweet husband who knows that I have always wanted an old fashioned bicycle with a bell and a basket full of flowers.
21 comments:

Color is the catalyst that makes my crafting world go round. Nothing makes me happier than the chance to explore the endless color possibilities for a new project. Brights, pastels, neutrals...I can honestly say that I love and appreciate all the varying colors of the spectrum. Even challenging colors, like mustard yellow, can be beautiful when used in combination with a neutral such as gray. Right now, I am really jazzing on the following colors:

Ask me again in a few months because this list is always changing and is heavily influenced by the seasons.
15 comments: 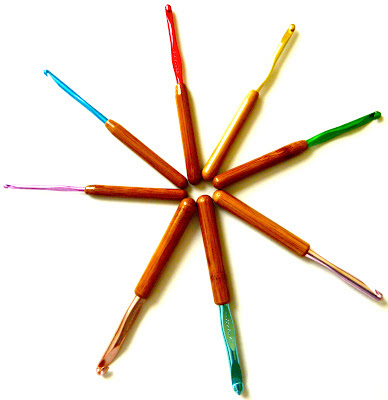 Now that I am working on my third crochet project, I felt that it was time to make a long term commitment to the craft and invest in more comfortable hooks. I really love these bamboo handled ones from Susan Bates. They have allowed me to crochet longer without feeling any hand or wrist pain. My old set will be given to my niece after a little bit of refashioning. Thanks Nicky for the idea! 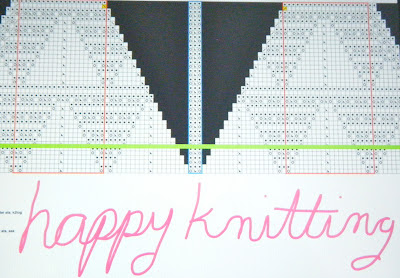 Another addition to the toolbox is a great PDF reader app for the iPad and iPhone called Goodreader. Most of my patterns are stored on my iPad and now with Goodreader, I am able to mark them up to my heart's content. There is even a moveable highlighter function which I use to keep track of where I am in a pattern or chart. This is also a great way to highlight the instructions for a specific size. No more searching for a pen or sticky notes. For someone like me who has many WIP's to manage, this tool makes it easier to keep the different patterns and project notes organized and at my fingertips.
12 comments:

When I saw this yarn at my LYS, I have to admit that there were some grand design plans floating around in my head. Maybe a cowl with a cool pattern that would show off the pretty colors. How hard could it be really, since the yarn was so gorgeous to begin with. So I pulled out all of my stitch dictionaries, narrowed down some possible patterns and started swatching.

After about eight attempts to find the perfect stitch pattern, my yarn was looking like something the dog dragged in. (lesson one: when attempting to design something, try to overcome any stingy tendencies and buy extra yarn to experiment with)

Every stitch pattern that I tried, from lace to cables to slip stitches, all seemed to be competing with the yarn. (lesson two: never fight with the yarn since it will always win)

So at this point, I was ready to throw in the towel. I actually considered casting on for a simple stockinette stitch cowl and calling it a day. (lesson three: everything looks better after a good night's sleep and fresh eyes)

When I came back to the cowl the next morning, I noticed how pretty the yarn looked in reverse stockinette stitch. Here I was trying all sorts of fancy patterns when the yarn clearly was calling out for a simple one. So with that in mind, I had another look through the stitch dictionaries and finally settled on one called the purl ridge which was just a combination of stockinette and reverse stockinette. I decided to skip the swatch and just go for it. And here is what I ended up with: 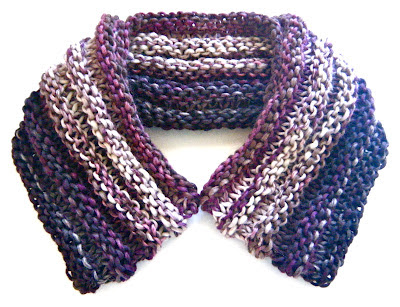 The finished cowl was everything that I had hoped for. 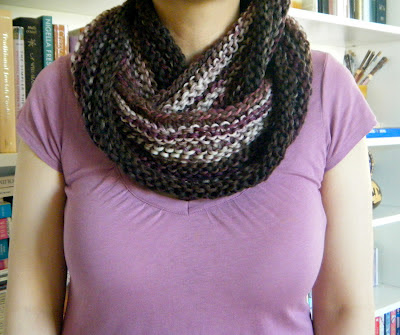 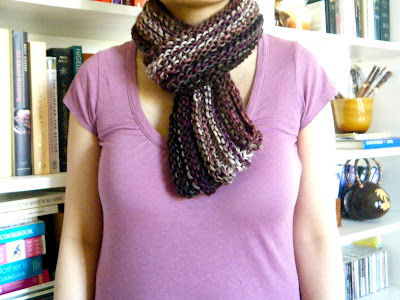 It even had a name, the Cherry Blossom Cowl, inspired by a comment from Shannon. But regrettably, there was just one small problem. (lesson four: before congratulating yourself on a new design, search ravelry to see if someone had already beaten you to it)

(as always, check out FO Friday with Tami's Amis for a variety of knit and crochet fabulousness)
12 comments:

Little Guy and the City

We are back from NYC. Lots of wonderful memories despite the rain and cold (and lack of yarn shopping). It was the little guy's first visit and I was kind of nervous about how he would take to the city. No need to have worried though, because his high energy level was a perfect match for its fast pace. We mainly stuck with touristy things like visiting the Empire State Building, Times Square and Rockefeller Center. Oh, and lots of toy stores. The little guy is now telling us that "next year, I am going to second grade, then high school, then college, then The Big City." Sounds like an awesome plan to me!
7 comments: